When I was about 6 weeks old, my parents took me to church–Bossler Mennonite Church close to Elizabethtown, PA. I was born in July–9 months, almost to the day, from my parents’ honeymoon night the previous October. When I got older and could figure out such things, my mother simply said, “Nothing happened before we were married.” She said it, so it must be true. In those days, abstinence was the professed norm for engaged couples, and a white dress almost certainly meant the bride was a virgin. A couple whose first child arrived too soon after the wedding date had to appear in front of the congregation and confess their sin of fornication.

The Christian Mingle of the 50s and 60s happened after the Sunday night service with girls and guys in separate groups lingering, a girl hoping for a guy to break out of his circle and ask her for a date. Weddings were frequently held in the fall, not in summer, after crops were harvested and the family and relatives had more time for big social events.

Here is Dad’s first cousin, Ruth Longenecker, all decked out in her caped, white wedding dress and black shoes gazing at her tall, blond groom who wears a plain suit and no necktie. She carries a lacy handkerchief, something fancy, inserted into a white Bible (flowers were forbidden then) as she walked down the aisle.

Bossler Church, which celebrated its bicentennial in 2011, was not at all fancy: white building with no steeple and a separate door for the women to enter at the left of the main entrance. 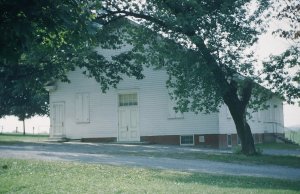 The interior too was spare with a middle aisle separating two rows of benches, the one on the right for the men. The other on the left for women. When Mr. Christian Clown Daring Do visited with me one Sunday, he plopped down on the women’s side, mortifying everyone including me.

The separate sections, however, made for a wonderful blend of voices when we sang a capella in four-part harmony. No piano or organ in sight.

Of course, no fancy garb for members or minister: plain coat and sometimes a beard for the men, and a caped dress with a prayer veiling for women. Usually the older women had black ribbon attached to the veiling while the younger ones had white ones. 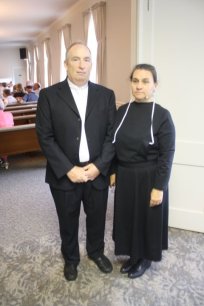 Next to the church was Washington School grades 1 – 8 with our church deacon once serving as schoolmaster: fancy bell tower, plain interior embellished only with replicas of

Gilbert Stuart’s painting of Washington and Lincoln, an American flag, and little cards for each letter of the alphabet, printed lower and upper case set above the blackboard. 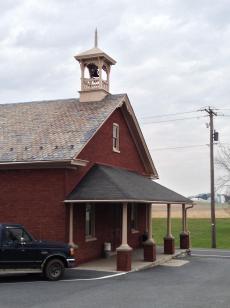 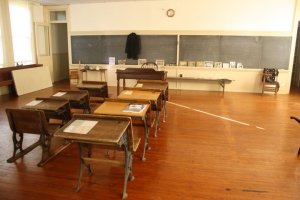 For Mennonites, the church was the hub of social life. When Howard Longenecker’s barn burned down, twice, men were on hand for the barn raising. Women gathered regularly in an anteroom at the church, or, later, at the school for sewing circle where they made comforters, baby blankets, and quilts. 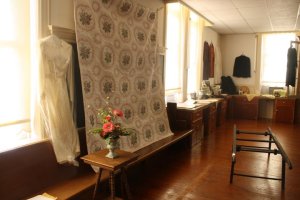 Plain or fancy? Which do I choose?  I choose both–as long as they are beautiful. “A thing of beauty is a joy forever.”      John Keats, Endymion

To some, my story seems quaint and odd. To others, it resonates because you share a similar heritage. What experiences in your childhood or teens do you think curious readers would like to know about?