Wayne is good in math. He with the crew-cut and quiet, methodical ways can easily navigate math’s maze of numbers. We are both fourth graders at Rheems Elementary School. Unlike me, Wayne is a mathematical whiz; in a split second he makes sense of long division and fractions. But he likes to explore nature too. The village of Rheems is his home and mine is farther out, closer to real country.

Wayne is behind me in photo circa 1954

Wayne and I sometimes walk into Grandma’s Woods to explore nature and make up stories. One day we walk together to the woods, the three or four acres my sister Janice and Jean and I have already dubbed Sherwood Forest. The woods is actually a thicket of trees encircling a small quarry, now overgrown with moss and grass. The best route to the woods goes up the sledding hill, through a cluster of weather-worn Revolutionary War era tombstones growing cockeyed out of the grasses and overhung by raspberry bushes arching their fruit-laden spikes on the edge of the woods, not far from the Pennsylvania Railroad tracks.

Minutes become an hour or more as Wayne and I fancy Robin Hood and his merry men traipsing through. Another day we might imagine Hansel and Gretel wearily trying to find their way back home. The Eagle’s Nest is a special stop-off in the woods: there is no eagle, not even a nest. It is just a spoon of sod and rock perched on the edge of a bluff overhanging Grandma’s sweet cornfield. Before going back down the hill, Wayne and I sit now in its concave shelter and relish our snack of fresh-from-the-garden mint tea, pilfered from Grandma’s Frigidaire and fresh-baked molasses cookies.

Wayne asks, “Did you know New York City is built on solid limestone rock, just like the quarry over there?” He points in the direction of the Heisey Quarry, on the other side of the railroad tracks. Wayne is always making scientific pronouncements like this, adding to my store of knowledge.

But at the moment I’m more interested in plants growing in the humus right beside me. “Did you know there’s medicine all around us? My Grandma comes up here to find the leaves for Stinkin’ Tom, an ointment that smells like skunk, and Pig’s Ears plants to make salve for cuts and bruises and rashes.” Grandma harvests the herbal mixture from the plants in the woods and fries it in lard to concoct an ointment for healing. (See recipe “My Grandma’s Kitchen” post.)

“No kidding?” Wayne seems shocked that I know something he doesn’t already know.

“Yes, yesterday when I skinned my knee on the gravel, she got out her little round tin box, stuck her finger in the greenish goo and slathered the magic potion all over the cut. It smelled like licorice and onions  . . and skunk!”

Soon we scale down the twenty-foot bluff to flat land, barefoot toes pointing downhill, gathering momentum by the second. We run a short distance as the ground levels off. “Ouch!” we wince in unison; the gravel on the path to the house hurts our tender feet, not yet made calloused by long summer days outside.

Grandma is out on the back porch to greet us. Greet us? Heavens! She looks mad. And she has a yardstick in her hand too. Wayne flees as I get the one licking of my life from my Grandma, my warm, cozy-sweet Grandma.

I can’t imagine why she is giving me such a hard spanking just for playing in the woods with Wayne. What did I do wrong? Wayne was Robin Hood and I was Maid Marian, just like always. Aghast and confused, I wonder, “What is so bad about what we did that Grandma would get mad enough to spank me so hard?” I thought we just went for a walk in the woods. 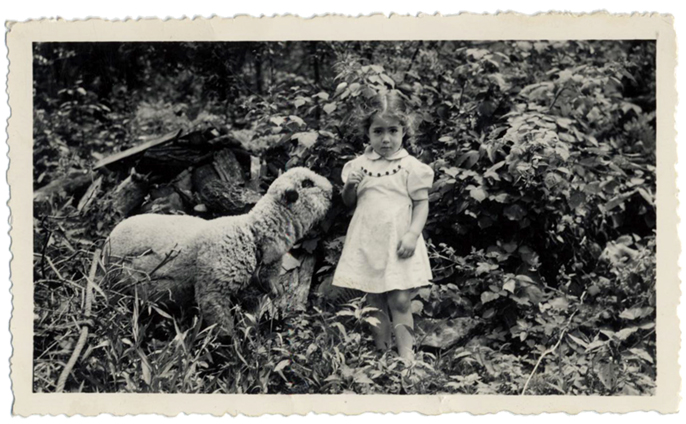 The Back Story: My Victorian Grandma

Grandma is Fannie Horst Martin Longenecker, a handsome woman from Middletown, Pennsylvania, who was fancy before she married her plain Mennonite husband, Henry Risser Longenecker. 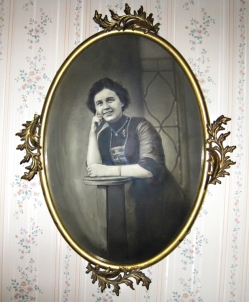 As a girl, Grandma loved music and always walked to get back and forth from her piano lessons. Riding home from her lesson one afternoon, she was accosted and violated by a “man with a swarthy complexion,” according to the newspaper article about the incident.  From that point on, her father, Samuel Brinser Martin, allowed her to ride a horse to and from her lessons.

My Grandma Fannie never told anyone about the incident until her sister Sue shared the story with Grandma’s daughter, my Aunt Ruthie. Years later, I learned of the story and understood only then why she had whacked my bottom so mercilessly.

Here’s my warm, cozy-sweet Grandma but years older than she appears in the story.

What innocent act do you remember from your childhood that was misinterpreted by an adult? Were the  consequences similar to mine? Tell us your story.

5 thoughts on “A Walk in the Woods: Innocence and Disgrace”