My father wore many hats. Work hats mostly, but also a goofy blue derby hat I faintly remember stashed high up on a closet shelf, and a fedora reserved for Sundays or other special occasions. Through his long history at the shop, Daddy sold a wide array of tractor brands which supplied him with hats embroidered with their company logo: Massey-Harris, Minneapolis Moline, New Idea, Fox, and Deutz.

His hats changed with his loyalty to the brand of farm equipment he was promoting. None made him happier, however, than the hat he wore with one of his first purchases after his father, Henry R. Longenecker, passed the business on to him. With the tag still attached to the grill, Daddy proudly drove the new Massey-Harris tractor back and forth in the alley next to the shop in Rheems, his sister Aunt Ruthie recording the spectacle with her new 16 mm movie camera.

The Welding Helmet Invented by the German Hans Goldschmidt in 1903, welding was one of my Dad’s specialties, a boon to farmers with harvester units or even plow shares needing repair. A free-standing acetylene cylinder and oxygen tank for welding stood near one of the double wooden doors. This allowed easy access for welding repairs as a tractor or harvesting equipment was pulled through the giant, wheeled doors that ran back and forth on a metal channel.

I watched Daddy slap a Darth Vader-like helmet on his head, don long, flared-sleeve gloves, and use long, skinny welding rods to fuse broken parts together. Sparks flew everywhere in this Fourth of July fireworks show extending into August, the height of the harvesting season.

Along the back of the dark recesses of the shop was a large grinding machine that could sharpen a 6 to 8-foot section of blade used for scissoring hay, wheat or barley.

Daddy did most of his work in his shop but occasionally he was called to the field. A doctor of motors, he made “house” calls to the fields of anxious farmers, work stalled with broken-down equipment.

My father was first of all a farm implement dealer and mechanic, but he also farmed ten acres of land in Bainbridge, Pennsylvania combining corn and tobacco crops and then later corn with tomatoes. Farming is serious business in the searing sun requiring a cap with a long bill. The result:  a white “farmer” forehead and red-brown cheeks and arms. My mother and Aunt Ruthie often wore sun bonnets, in the field but as you can see, we were bare-headed and probably bare-footed too. 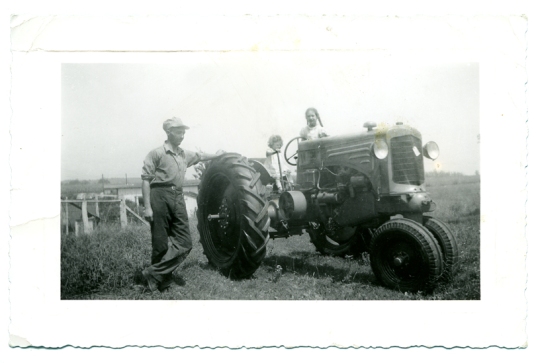 A beekeeper too, my dad wore a bulky hat complete with a mesh veil to smoke out the bees.

Church, weddings, funerals – all were occasions for a fancy fedora. But one occasion in particular required dressing up: posing on the steps of the U. S. Capitol building ready to meet with congressmen regarding the threat of a proposed air base to some of the rich farmland of northern Lancaster County. A sizable delegation of plain people (many of them Mennonites) including my dad in his fedora and Grandma drove to Washington D.C. to make their case with government officials. When a follow-up investigation was conducted, sink-holes had reportedly been found in the farm-land around Bossler’s Mennonite Church. The case was subsequently closed.

Tell us about your dad’s hats – what he wore, or any other “Dad” memory you want to share now.