In July, my Southern friend Carolyn honored my birthday in a “Shake-Rattle-and-Roll Butter-Shake” party. Today you can open up an old-time textbook with me and behold first-graders learning about butter making in a reader published by Lyons and Carnahan with the copyright dates spanning the years 1927-1936. 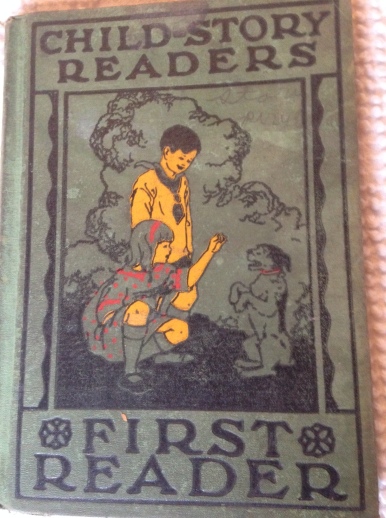 We got the cream from a cow.

We put the cream in a jar.

We shook the jar.

Jack and Jane even added a pinch of salt to the mixture, and afterwards they had a party of butter on bread!

Another page shows a recipe for butter milk made with a churn with Aunt Ellen assisting.

Henry Risser Longenecker, referred to by friends and family as H. R. or “Hen,” was my grandfather on Dad’s side of the family. He died when I was five, but I have a distinct memory of him killing a snake in the grass with a long stick. Like my father, he was a doctor of motors interested in steam engines, Model A Fords, and farm equipment. Until I unearthed his autograph book, I had no idea he had artistic leanings as revealed in his autograph book. Autograph books, common in classrooms in the 1800s, contained signatures, artwork, and bits of poetry. According to Folklore: An Encylopedia of Beliefs, Customs, Tales, Music, and Art, Vol. 1 (edited by Thomas A. Green) autograph books, existed as early as the fifteenth century and were seen as “a mark of gentility until the beginning of the twentieth century.”

The cover of Henry Longenecker’s autograph book reveals artistic flair with a faint inscription of a great virtue taught to every school child, the word Truth visible if you squint carefully at five faint letters appearing close to the embossed yellow flower. 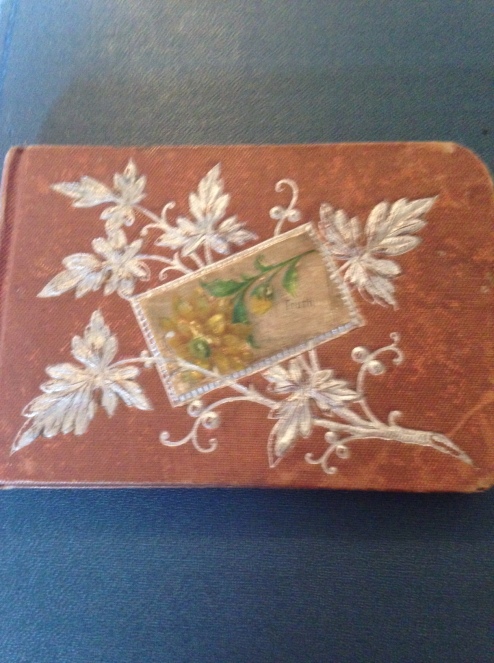 Painted artwork, still-brilliant, graced most pages like this one, complete with signature and date.

Autograph books tell us several things about students in the late 1800s:

1. Penmanship was taught and valued as an artistic skill.

2. Friendship and learning were intertwined. Both were expressed as an art form.

What else can these books teach us?

Coming next: What color makes you sing?

46 thoughts on “Moments of Discovery # 3: Two Butter Stories and an Autograph Book”