When I registered online for the 5th season premiere of Downton Abbey, there were fifty-nine (yes, 59!) salutations to choose from on the drop-down menu. These included Father, Monsignor, Cantor, Rabbi, Lieutenant Commander, Dean, Major, Mayor, and the humbler Mr. or Ms. I didn’t see “Lady”! Other designations included Sister and Professor. At different stages of life I have been both: Sister Longenecker and then Professor Beaman.

Downton Abbey is a cross-section of the social strata of post-Victorian England, an assemblage of characters from both upstairs and downstairs. Here it is reflected in the postures and apparel of cast members in the series: maids in aprons, ladies in plumed hats, men hatless or in fedoras.

Last year when our PBS station invited us to a gala celebration for Season 4, we stepped right into the show along with other party goers wearing period costumes and cast members appearing as life-size cutouts for picture taking. You can see it here.

This year we were greeted at the door with a trivia card. Among the questions was this: Lady Violet thinks her new gardener, Pegg, has stolen what item for her home? The choices are knife, cane, bell, or nutcracker. I don’t remember, do you?

First, we met a maid from downstairs with duster in hand . . . 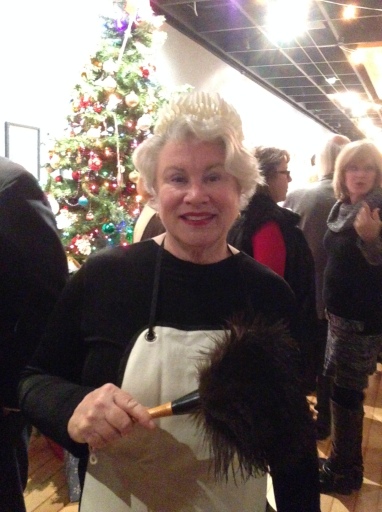 A clansman from across the border, clad in plaid . . .

Middle-class Americans making a vain attempt to mingle with the British aristocracy . . . 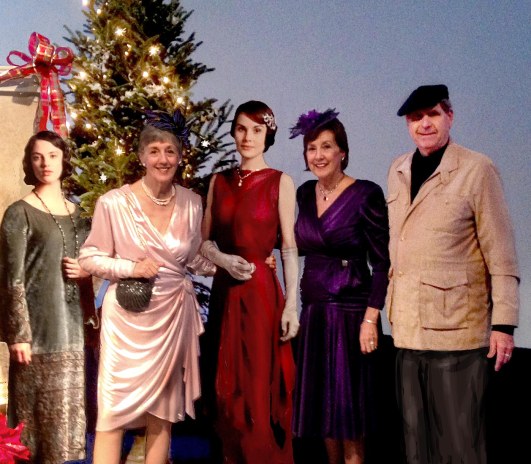 Sister Janice and I pose before the entire cast with headgear rivaling the goofiness of Princesses Beatrix and Eugenie at the wedding of Will and Kate: 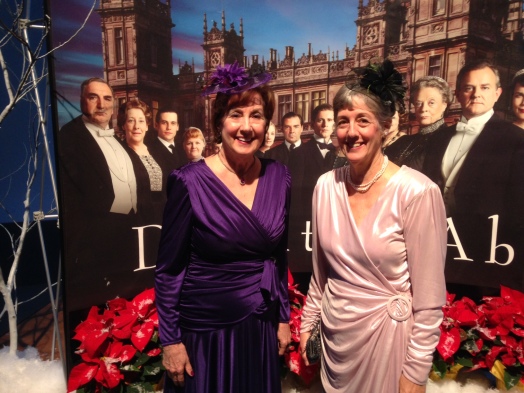 And finally, the genteel Jennifer Pastore, proudly garbed in a more-than-100-year-old dress worn by her great grandmother, Elizabeth Vann, the first woman editor of a newspaper in Florida (Madison, FL). A flawless little black dress – a perfect fit! 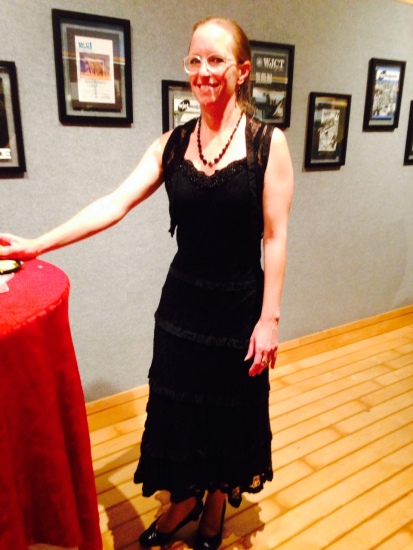 And then, the climax of the evening: the screening of episode 1, season 5, which begins in 1924 – the radio a hot, new technology.

We were on the edge of our seats as each scene unfolded, asking, What happened to Edith’s child? Where is the fire? What about Anna?

And then of course, scenes with seeds for future episodes:

Throughout the movie, there were more zingers than usual from the Dowager Countess, Lady Violet: “There’s nothing more simple than avoiding people you don’t like!” 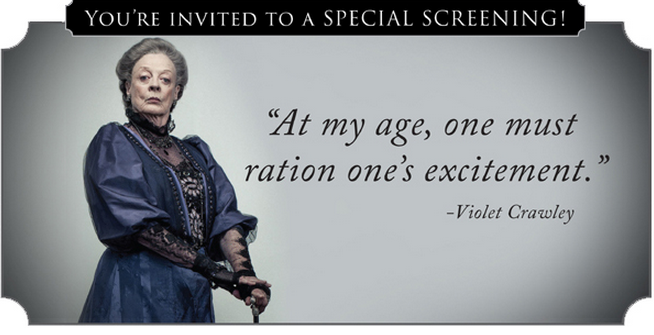 Do you think Dowager Countess Violet is right in either quote? Why or why not?

Care to comment about social class in the show? Or in present-day society?

P.S. Despite rumors to the countrary, the station manager announced unequivocally that there will be a Season 6!