“I’ve been robbed!’ These are the only words artist/performer Cliff can utter as he walks toward his Dodge van, noticing that the air-vent window on the driver’s side has been pushed in at an odd angle. It’s about 4:30 a.m. Good Friday, April 1, 1994.

Rushing around the vehicle to open the side doors, he begins to take inventory of what’s missing: sound equipment including a stereo mixer, a professional-grade tape player, a recorder and at least 150 treasured CDs missing from cases. An envelope with cash – gone. All gone! He walks frantically around the parking lot of the Quality Inn he is leaving and spots a black suitcase, which the thieves have thrown into a ravine. Empty!

It was the end of a very productive month presenting 35 multi-media school assembly programs in Florida and Georgia. Cliff had driven to Nashville, Tennessee because his next shows would be in the Memphis area. He had been looking forward to boarding a 6:00 a.m. Delta flight to come home on Good Friday and spend Easter weekend with his family. This weekend, however, turned out to be a mixed blessing – The splendor of the resurrection service at church conflicted with the discordant thoughts about his recent loss: Lost equipment, lost musical discs, remembering malfunctioning hotel parking lights that had probably contributed to the thieves finding his van easy prey. And after all, it was Nashville, music city.

After returning to the Nashville airport after Easter to continue his itinerary, he takes stock. Though the robbery has felt like a violation, a form of rape actually, he could count his blessings: 1. His CD player vital to the music that accompanies his drawing was in a separate case, undisturbed and  2. He had copies of program music at his home base, Jacksonville.

Still reeling from the impact of the loss of inanimate “friends” that provided the musical score to his chalk drawing on a large easel, he must soldier on toward St. Louis, Missouri for next week’s shows. Behind the wheel again, he popped in a cassette tape, a musical companion on the long hauls between cities: soaring classical music and uplifting hymns, a distraction from the recent robbery. His itinerary takes him through Cape Girardeau, Missouri, where his journal notations begin:

The undulating ribbon of asphalt in Interstate 55, the hum of the van engine, rumbling of tires, and rushing air together with the music combined their forces to calm my mind . . . .  Now a spot of yellow caught my attention. Was it litter – or something else? The blurry image that I imagine are daffodils soon vanished from my side view mirror.

I keep driving but feel an urgency to turn around. The nest of daffodils keep calling me. “Come back. Don’t go another mile. You may miss a special moment in your life, a moment that can put a special gladness in your heart.

Finally, he turns around at the next exit, heading south, as he wonders, “How far had I traveled since I had seen the flowers? I honestly had no idea, but I retraced my path even farther than I thought necessary to spot those daffodils again.” He gives up and heads north again. But feeling a tug even more insistent, he turns the van around one more time.

Passing over the exit I continued searching, almost holding my breath. My jaw set, my eyes straining for anything yellow.

I nervously looked at my watch. I could not believe that two hours had passed since first sighting those images of hope. Miles and time seem to merge together. My odometer indicated I had gone 120 miles since first turning back. What was I to do? It was getting late; I had to get to St. Louis soon.

And then ahead I saw it—a flash of golden yellow. My heart leaped with joy—It was there after all, several clumps of daffodils, but I saw two huddled together, spring-like beauties, raising their slender pastel green fingers, lifting golden heads to the heavens! 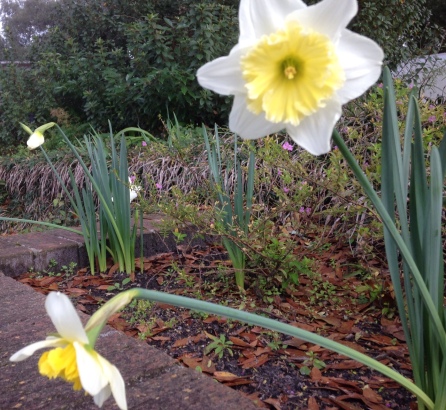 The next challenge: Finding a container and extracting the two daffodils from the hard soil without a trowel or shovel.

With traffic whizzing by and like a mad man on a single mission, I quickly swung open the back and side doors of the van, and found a plastic one-gallon container of spring water. Out gurgled the water. Then, I rummaged through my tool bag until I found a razor blade to cut out the topside portion of the jug.

How to dig up the daffodils though?

Once again, I dashed back to the van and from deep within my jungle of sound and art equipment, boxes and bags, I pulled out an aluminum yardstick. With both hands on my innovative shovel, I vigorously dug down deep into the damp soil and rock encasing the two flowers. After leveraging the living plants into a plastic bag, I carefully placed them into the jug, watering the daffodils and even hiding them in bushes outside overnight for safe-keeping at hotel rest stops before the next trip home.

On this Saturday, April 9, 1994 my husband spent 2 ¼ hours driving an extra 125 miles to capture in real time this evidence of hope and then later spent more hours penning this story in a travelogue entitled “I Stopped Beside the Road Today.”

The robbers did their dirty deed in an unlighted parking lot and left no evidence of their identity behind. Yet, Cliff searched for beauty among the rubble and found it, proof of the hope it represents.

I have saved the dried-up daffodils, one headless, in a blue vase for 21 years.

And I can’t find it in me – at least not yet – to destroy these bedraggled tendrils – evidence of a Bad Friday turned Good!

Have you ever been robbed? Have you lost something so valuable you searched and searched? Here’s where to tell your story!

Bonus: Tradition has it that the daffodil, the Lent Lily, will open on Ash Wednesday and die on Easter Day. In a poem entitled The Lent Lily, A. E. Housman writes of the daffodil as a yellow trumpet heralding the glories of spring.

Coming next: Our Easter in Ukraine

33 thoughts on “A Robbery, Sad Friday, and a Clump of Daffodils”