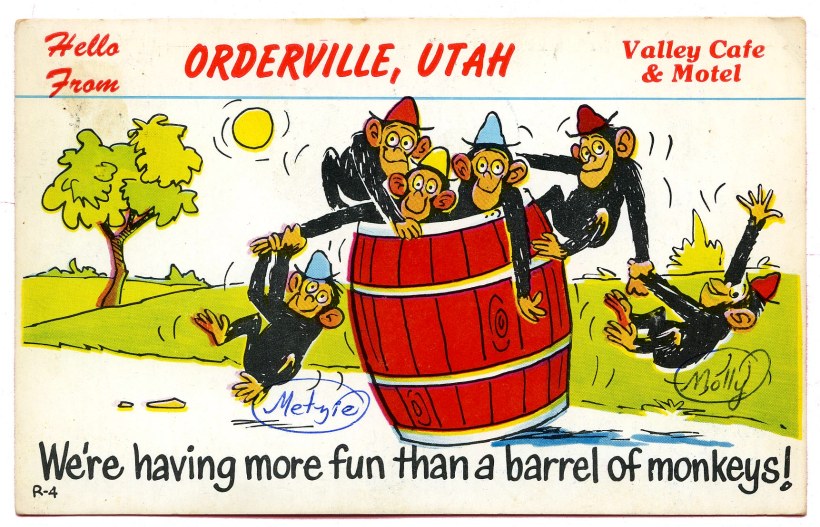 The postcard says Metzie and Molly if you look closely, but Joann and I were unofficially known as Mighty Metz and Sister Styx, the dashing duo that rode in the back seat of a Chevy Impala on a road trip with Joann’s parents, John and Mary Metzler.

Our Southern route included the cotton fields of Alabama . . .

. . . and Rock City, Georgia with a view of seven states

How I Paid for This Trip: I wrote an adult study series for Herald Press during May and June of 1964 for which I was paid $500.00. I brought cash and Traveler’s Cheques. Credit cards like the Diner’s Club Card were in circulation back then, but we didn’t have any. Actually, like many Mennonites, we thought credit cards were a little shady because of the possibility of misuse.

Frugality, Joann’s and Mine: 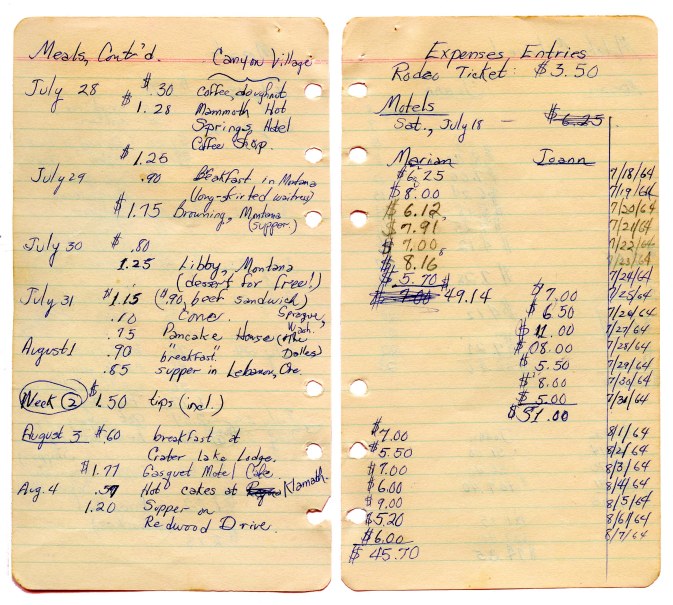 Joan and I alternated weeks in paying room costs. I paid tolls and park entrance fees  instead of gas, which was probably less than 30 cents per gallon then.

I remember paying 50 cents to drive through a redwood tree!

We both kept diaries and photo logs. Mine looks battered and torn. Still, there’s a record. 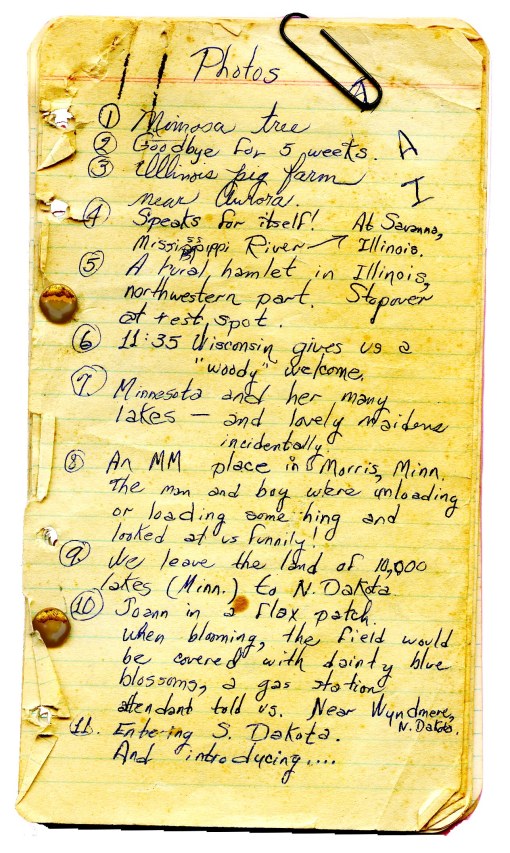 Church: We attended a service at the Mormon Tabernacle but the choir was missing, gone to the World’s Fair. Ugh . . . so disappointing!

Sin: We drove by garish casinos and hotels down Main Street, Las Vegas. Among the glitter and glitz of sky-high, flashy neon lights, we noticed advertisements for $ 10.00 weddings. Do you think people got married drunk? we wondered.

Western Hospitality: On our way to Sequoia National Park we pulled off the road and discovered a friendly guy mowing his lawn. Thus we met the Shaefers. Mr. Schaefer showed Uncle John his orange grove, and Mrs. Schaefer loaded us up with a 12’ x 15’ box of peaches, oranges, two bags of grapes, 2 bags of oranges, and a quart of raisins she had picked/dried herself.

Thanks to the miracle of “General Delivery,” I got mail from home at planned intervals. Here’s a note from Aunt Ruthie with a cascading series of cartoons

And a birthday card from my sister Jean with a letter . . .

. . .  and a note from Mother chiding Jean for not leaving any space to write: “I don’t know who she thinks she is . . . didn’t leave any space for Mother!”

Two letters sent to me addressed simply as Los Angeles – General Delivery came back with a note “Unclaimed – Return to Sender.”  Imagine that!

I brought back gifts for all the family. Janice received a myrtle-wood vase from Oregon, brother Mark a table lamp with a cactus base, and Daddy, a polished piece of petrified wood. My ledger shows I bought Jean a pretty blouse for $ 4.10, but alas no picture here!

And something for myself too

The strangest thing I brought back: Water in a Gerber’s baby food jar (Aunt Ruthie’s suggestion) from The Great Salt Lake, where we floated with no danger of sinking.

We don’t make a photograph just with a camera, we bring to the act of photography all the books we have read, the movies we have seen, the music we have heard, the people we have loved.