Nuns live in convents. At least that was true in America in the1960s. Strictly speaking I was not an actual nun, a Catholic sister with a habit like Karen Leahy, who left her convent at Mount Maria to pursue a literary life and experience more freedom. (My review of her book The Summer of Yes here.)

As a student at Eastern Mennonite College, where my un-cut hair was piled neatly under a prayer cap, serving the church was held in high esteem. In fact, the idea of service was drummed in to me as a teaching intern. And so, when the dean of education at the college suggested I apply to Lancaster Mennonite School for my first teaching job, I jumped at the chance. I could serve God and pursue a career I already knew I loved.

I didn’t wear a wimple, scapular, or tunic either. But, as a Mennonite girl in the 1960s, I did wear a prayer veiling and caped dress. My prayer veiling served to acknowledge my obedience to church rules while a cape over my bodice muffled whatever feminine contours I may have had then. Like Karen Leahy, known as Sister Marie Cordé, my clothing announced my separation from the world before I uttered a word. It also assumed a higher set of expectations from me.

Even before I joined the faculty at Lancaster Mennonite School, I wore a prayer veiling and a caped dress, but not all the time. Just for church. But now as Sister Longenecker, a teacher at LMS, plain clothing was de rigeur, not optional.

And I could do so with one of my EMC classmates, Verna Mohler. She and I had shared dorm space at EMC. Now we would transplant ourselves into a similar arrangement as beginning teachers at LMS.

Verna and I were side by side and plain. She taught American Literature, and I English Literature along with Penmanship and Spelling.

Yes, side by side in the yearbook, The Laurel Wreath, whose table of contents featured 5 divisions: Faculty, Students, Organizations, Activities, and Worship. There was no orchestra or band – no football or basketball teams then either. Certainly no theatre.

During our first year of teaching we lived in adjoining rooms in the girls’ dormitory, an awkward situation because of the proximity of students. One evening before supper, I took off my cape and went to the dining hall with just a sweater over my dress. A perceptive student reported me to the Dean of Girls, who gently suggested I mend my ways and remain caped around students at all times.

Of course, our students were plain too . . . 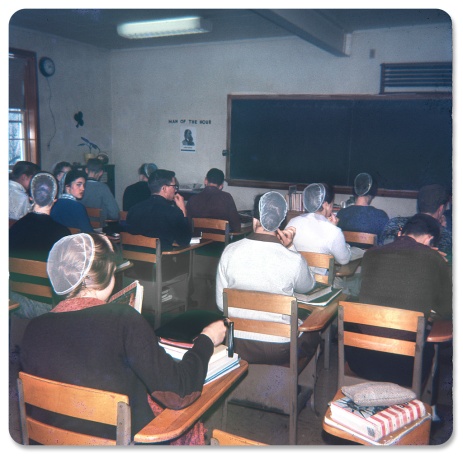 But my bulletin boards were fancy

The second year Verna and I moved out of the girls’ dormitory and lived on the edge of campus in a mobile home, which we shared with June Sauder, the Home Economics teacher.

Our trailer was situated in a park-like setting on the other side of the Mill Stream, a bridge between us and campus buildings.

Here again I flirted with danger. One of us rented a TV to see the shocking story of the Kennedy assassination unfold and subsequent funeral proceedings. A student noted the blue glow from our trailer window and reported us to the administration, an action for which we were reprimanded. However, words that we heard on the broadcasts became additions to our students’ vocabulary knowledge: cortege, caisson, requiem.

Sometimes after hours, we skipped wearing the prayer coverings, but always had our heads covered, even if it was with a filmy white bandanna.

Verna’s Comet became our get-away car when June, Verna and I drove into Lancaster city with serviceable black purses to admire fancy red ones in a shop window, our expressions hopeful.

The Lancaster Mennonite School publication, Bridges, to which I still subscribe, has changed dramatically since Verna’s and my short tenure there. Student rosters now include names like Rodriguez, Rosenfeld, and Fukuhara along with the typical Lancaster County Mennonite names Weaver, Harnish, and Nissley.

The LMS sports teams are going to the playoffs this year. Lancaster Mennonite and Lancaster Catholic are competing in an international ping-pong tournament. Most interesting of all, the name of Lancaster Mennonite High School appears on the Fulton Theatre marquee in downtown Lancaster displaying the 2015 Beth Bash Award for Excellence in the performance of Shakespeare’s The Tempest. Imagine! 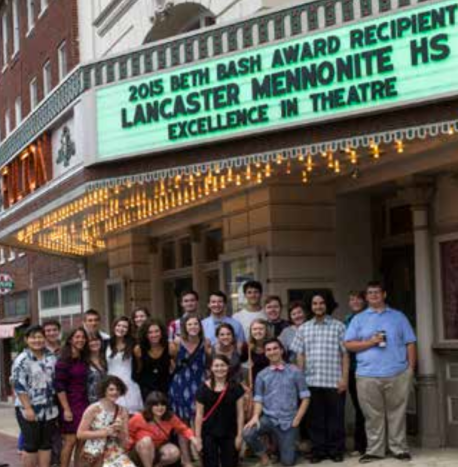 As a school, we are building stronger wings and growing deeper roots one student at a time. Here students encounter a risen Christ who calls them to transformation, empowering them to be world changers. Our Graduate Profile states that our graduates will “practice global awareness, cultural sensitivity and humility, respect, an anti-racist lifestyle and compassionate living.”

With stronger wings and deeper roots, the graduates of the class of 2015 were commissioned to walk humbly with Jesus . . . and, in doing so, partnering with God in building a kingdom where individuals “from every tribe, language, people and nation” are gathered together around the Lamb.           Revelation 5:9

Coming next: Peachey House, a Prequel

63 thoughts on “My Year in a Convent”