My brother Mark was my first baby. He was born when I was 12, and I soon became a mother to him. I even have a picture to prove it, a blurry movie still from one of Aunt Ruthie’s 16 millimeter camera shoots.

I most certainly bottle fed him and changed his diapers. When he was a few months old, my sisters and I made up a little ditty often chanted repeatedly when we played with him:

Practicing our Latin, we would refer to him as “Marcus -a -um” when he got a little older. Looking back, I wonder now how much the age difference and his being our longed-for brother played a role in such playfulness.

Mark passed through the usual boyhood stages, going to school at Rheems Elementary (here pictured at age 8) and learning to ride a bike. 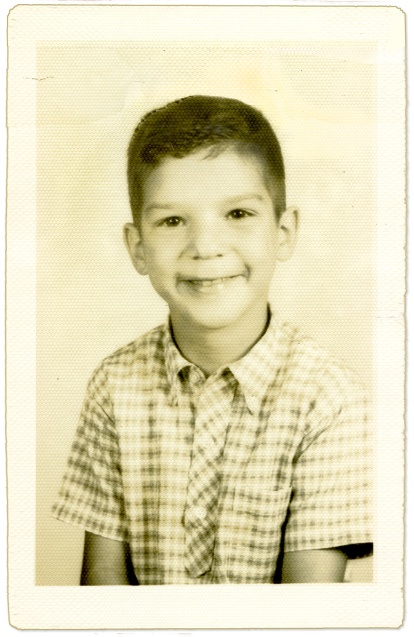 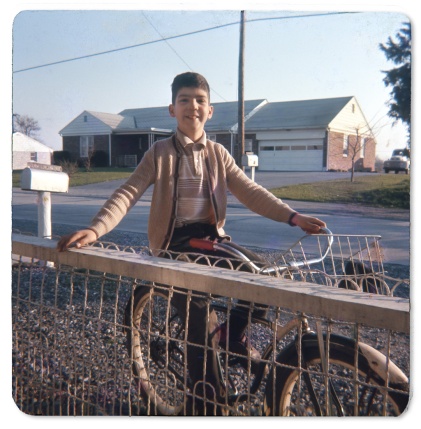 Like most boys this age, he climbed trees and played with his beloved dog, Skippy, butterscotch colored and 3-legged.

In the doggy photo, Mark is already wearing shop overalls and shop shoes ready for work at Longenecker Farm Supply, our family business in Rheems, Pennsylvania.

Eventually, his work at the shop translated into industrial arts credit at Elizabethtown High School, where he earned a certificate of attendance.

Here painted and sealed in polyurethane is a cartoon of Mark on a Deutz tractor which certified his skill at the wheel and gave a nod to his service with the Rheems Fire Department.

Later, he worked at our dad’s shop full time, from where he was often sent out to fix machinery when farmers were stuck needing repairs in the field.

As family members aged, he kept the home-fires burning at the two houses on Anchor Road, first ministering to our Aunt Ruthie’s increasing needs as her memory loss progressed. Because of Mark’s care, Ruthie was able to stay in her own home at the bottom of the hill for four years longer than would have been feasible otherwise. He occasionally took her dog Fritzie IV for walks, a dog variously dubbed vicious, feisty or protective depending on whom you asked. Out of respect for Ruthie and her devotion to her Schnauzer, he took care of a dog he didn’t particularly like and certainly didn’t love.

Simultaneously, he helped take our Mother Ruth to doctor and dentist appointments and often shopped for groceries, enabling our mother to stay in her own home at the top of the hill until she died last year at age 96.

When we realized we would be selling Mother’s house, Mark’s contacts from the shop along with his extended group of friends in the area enabled us to sell the property without a realtor’s assistance and accompanying fees.

Every Sunday now he takes Pearl Longenecker in her nineties to church at Bossler Mennonite Church.

Mark continues to live in Aunt Ruthie’s house with his daughter Shakeeta (Kiki) who moved in recently, caretakers of the Longenecker homestead we hold dear.

From my point of view, Mark does not suffer from the effects of striving, the bane of modern existence. It’s safe to say he has never slavishly checked off items on a to-do list or reached for the benchmarks of fame and fortune as many do. In other words, he hasn’t made a big splash in this world. But my brother Mark is a helper, living a quiet life that matters.

And whosoever shall give to drink unto one of these little ones a cup of cold water . . . , verily I say unto you, he shall in no wise lose his reward.     Matthew 10:42   King James Version

Are there unsung heroes in your family or among your group of friends and acquaintances? Thank you for spicing up our conversation here with your story!

Coming next: Help! A Vintage Photo in Need of a Caption