Is there a drop of Irish blood in my veins? I doubt it. I grew up Mennonite in the Longenecker family in Pennsylvania Dutch country, a hot-bed of Swiss-German ancestry.

Still, the Irish-named Donegal Springs is a mere 3-mile, 5-minute drive from Rheems, Pennsylvania near my birthplace. In the adjoining Dauphin County are Londonderry Township. In Bucks County, a town named Dublin, sister city to the capital of the Republic of Ireland.

When we visited Ireland, we met a congenial gentleman named Buchanan, who remarked that he has immigrant relatives buried in the Donegal Presbyterian Church cemetery, a place he once visited.

During my last trip to Pennsylvania, I discovered some vintage postcards stamped with penny postage, sent to Miss Fannie Martin, my Grandma Longenecker. Many of her postcards are embossed and saturated with color – no Photoshop filters needed.

In an era long before smartphones and text messages, postcards were valued. Instead of instant messages easily deleted and forgotten, these cards have become artifacts of my family history. The one below over one hundred years old is dated 1910. 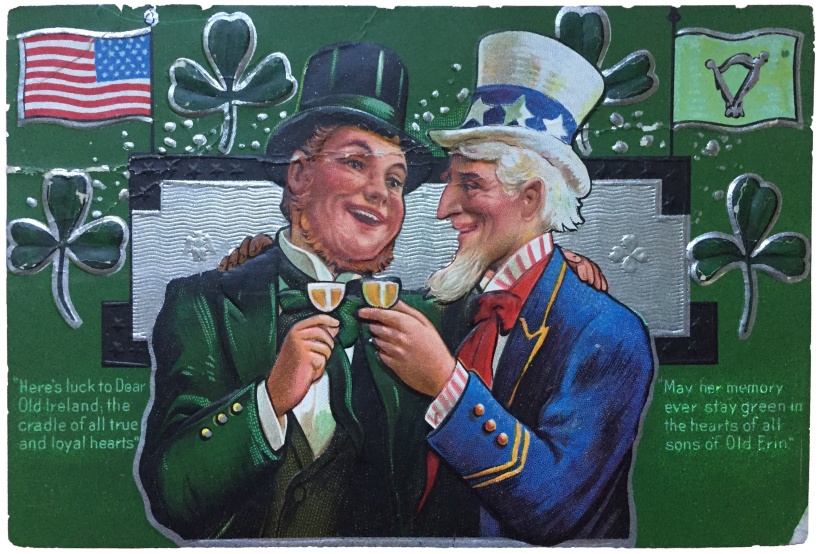 I live in a neighborhood where Irish names abound: Blarney Stone Court, Killarney Drive, Leprechaun Court, St. Patrick Lane. Names on residents’ mailboxes have included Dunleavy, O’Neill, and Kelly. We once had to fight a major retailer to retain charming shamrocks and moss-footed oaks in a wooded area adjoining our community. The hanging on our front door reflects the neighborhood and the season.

St. Patrick’s Day this year falls on a Thursday, March 17. Until then, I wish you the luck of the Irish.

May the wind be always at your back and your pathways peaceful. If you are Jewish, Mazel Tov!

To enjoy these Irish limerick lines below add just the right word to complete the rhyme. Keep in mind the missing word must rhyme with the first and second lines. (Answer key in next week’s blog post.)

A bather whose clothing was strewed

By winds that left her quite nude

Saw a man come along

And unless we are wrong

The reason was plain,

She slept in the rain,

There was an old fellow of Trinity

Who solved the square root of Infinity,

But it gave him such fidgets

To count up the digits,

There was a young farmer of Leeds,

Who swallowed six packets of seeds.

It soon came to pass

He was covered with grass,

Edward Lear, Ogden Nash, and Lewis Carroll are among the best versifiers of this humorous form. If you want to cook up your own limerick, here is a link to the recipe with a pattern for the rhyme scheme.