Did you wear a madras dress? Did it bleed?

Popular in the USA in the 1960s this cool summer fabric originated in Madras, India. Loosely woven cotton threads created a plaid patchwork of soft fabric that didn’t cling to the body during sweltering summer days. Some madras was made with dyes that “ran” when the fabric was washed, creating a trendy washed-out look, known as bleeding madras, according to this article in the Chicago Tribune.

I bought into the fad then with a blue madras dress, smocked, sleeveless and zippered down the back. With no cinched belt, the dress felt light and airy – cool. After it was no longer in vogue and looked worn, I used it for home painting jobs. 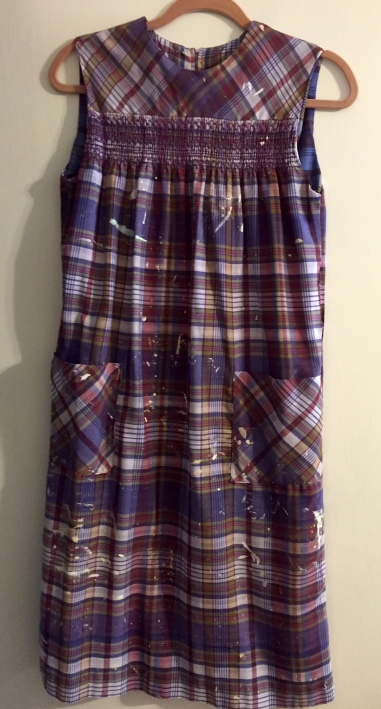 Before we move into our next home, we want to do some interior painting. Whether I will wield the brush or ask/hire someone else to do the job remains to be seen.

Soon the paint-spattered madras dress will fade into history. I will recycle it.

In July 1992 daughter Crista took a time-delay shot of herself wearing my blue madras dress to complete an assignment for her Photography 101 course. “Make sure you are in the picture,” the professor had said. So, with a 35 mm camera poised on a tripod, she snapped a black and white self-portrait in our back yard. Obviously, she didn’t need my assistance, and I didn’t know about the photo until she had it developed in the photo lab dark-room. A selfie before the era of smart phone selfies.

I made one of the prints into a book mark shown here. On the reverse side, I printed a verse from III John 1:4  “I have no greater joy than to hear that my children walk in truth.”

It’s no secret that I have paraded a lot of (treasured) stuff on the pages of these posts, evidence that I keep things. With a move imminent, I’m in the mood now though to discard, digitize, or recycle.

When it comes to STUFF, are you a hoarder or a “throw-away-er”? Maybe you fit a different category? Do you have a dress with secrets?

Your opinions are always welcome here. So are your stories.

Coming next: Paring Down and Tidying Up

Every week, The New Yorker magazine features a Cartoon Caption Contest, inviting readers to submit a caption for consideration. After three finalists are chosen, readers vote for the winning caption. You can view my first attempt at a similiar contest here on this blog with family members on a Sunday outing.

When we sorted through our mother’s things after her passing, I found a large photo likely from the 1970s taken by Ken Smith Photographs from Camp Hill, Pennsylvania. The photographer snapped my Grandma Fannie Longenecker with bonnet and neck scarf and my dad, facing her away from the camera. Apparently they are in line at a breakfast buffet likely at a farm equipment convention. Others in the line are unknown. All seem intent on filling their plates, some more than others.

“What was going on here?” I ask. Everyone in the photograph registers a similar band-width on the emotional scale, except for the couple on the left.

This photo begs a caption.

(On Seeing One on a Lady’s Bonnet at Church)

Coming next: Moments of Extreme Emotion: Where’s My Spyglass?