This month would be the 75th wedding anniversary of my parents, Ray and Ruth Longenecker had they lived. True, they bickered from time to time, but I knew their love was deep and abiding. I rested in the assurance that they would never divorce. There were signs: Before Daddy left for work down at his shop after the noon meal, he often played a little game with Mom, chasing her around the house to get his hug and kiss, as she pretended wanting to escape him. Daddy dried dishes once a week, on a Sunday somewhat unusual for a culture with strict divisions of labor between husband and wife.

They celebrated their 25th anniversary with the attendants at their wedding, Howard and Pearl Longenecker, also married twenty-five years.

When their 40th came along, we had a big shindig in early November, a week after their actual anniversary date of October 26, 1940. My sister Jean sent out fancy invitations:

The table was set just so with the “tulip” design wedding silverware, a florist’s bouquet, and finger food with cake the grand finale. 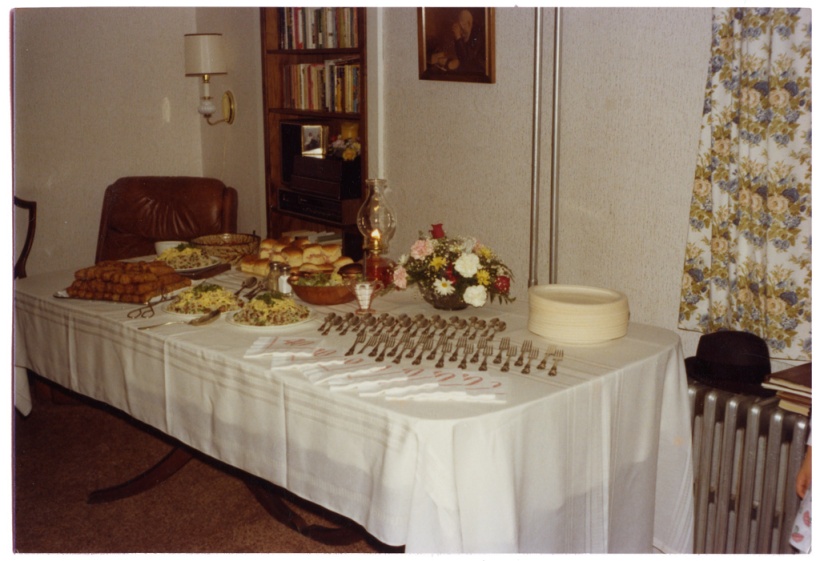 All four of us, my sisters and brother chipped in money to buy a chiming clock that sat for years on top of Mother’s buffet in the dining room, the ticking heart of the home. Our son Joel has inherited this clock.

And there were sparklers – and smiling faces on this happy day when I heard Daddy say, “I could never have found a better wife!

How It All Began

October was a favored month for weddings, at least among Mennonite couples in the 1940s-1960s. Farmers had harvested their corn, wheat, and sweet potatoes. The sowing-hoeing-harvesting cycle was slowing down. The land was preparing to lie fallow for the winter. Thus, plain weddings were often celebrated amid the riotous colors of fall.

I was born in July — 9 months, almost to the day, from my parents’ honeymoon night the previous October. When I got older and could figure out such things, my mother simply said, “Nothing happened before we were married.” Because she said it, it must be true, I reasoned. In those days, abstinence was the professed norm for engaged couples, and a white dress almost certainly meant the bride was a virgin. A couple whose first child arrived too soon after the wedding date had to appear in front of the congregation and confess their sin of fornication before they could be restored to church fellowship. I saw it happen once.

That was not the case for my parents, of course. I was born right on time, a honeymoon baby, possibly conceived right here within this idyllic, stone cottage.

My parents were married by the bishop of Hernley’s Mennonite Church and then returned to the bride’s home on Charlotte Street in Manheim, Pennsylvania where these pictures were taken. My father was wearing a plain, Mennonite “frock” coat with bow-tie paired with a natty fedora hat on his honeymoon. My mother too sneaked in some fancy touches on her dress. Another, of course, a large, fancy bouquet on the lawn. 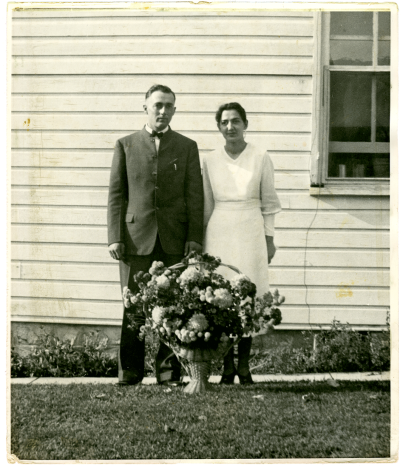 And though Mother wore covering strings attached to her prayer veiling and her dress was plain with no collar or lace, tiny buttons covered in white crépe traced a vertical line on the snug cuff of her sleeves. They don’t show on the photograph, but as a child I remember seeing them all in a row, sewn on her dress then draped on a hanger and pushed to the back of her clothes closet. Were there five? Seven? I don’t know or remember, but in my mind’s eye I can see them attached there. And I thought they looked pretty!

I liked her wedding shoes too, black suede with a vamp that reached almost to her ankle, very modish, I thought. When I saw Nine West with a similar vintage shoe and a button on the strap, I knew they had to be mine. 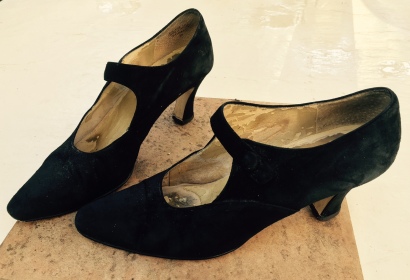 When we cleared out Mother’s house after her death, we discovered a saucer I had never seen before with a charming pink & blue imprint, a prophecy of things to come. They would have a baby, a girl, in fact three daughters and then a son.

Sparkling or not, what anniversaries (or other milestones) can you recall?

Coming next: Halloween Advice from My Good Witch of the North, Aunt Ruthie

When we cleared out Mother’s house last year, we set aside some of her treasures to be passed down to the next generation. This month we are labeling these items with specific names to avoid mix-ups.

One of Mom’s prized and most used wedding presents was her set of silverware. You can see the complete set here with a card that reads simply in blue cursive: “From Ray,” the groom, and then her new husband.

Mother and Daddy reached their 25th anniversary commemorated with many gifts of silver, including this candy dish bequeathed to Cliff and me on our 25th.

Then Mother and Daddy celebrated their 40th with a nice party which my sister Jean planned. They even reached their 45th, but not their golden 50th. It was not meant to be. Daddy passed away a few months before their 46th anniversary.

I remember Dad saying to Mom on their 40th anniversary, “I couldn’t have found a better wife anywhere!”

Perhaps these words could have expressed Mother’s sentiments on their 50th. The poet weaves some golden strands into her lines:

Coming next: Through a Glass Darkly: Anniversary # 48

Dear reader: After the August 5 publication, I will be posting once a week on Wednesdays in August, so I can devote more time to memoir writing. I appreciate so very much your companionship on this journey.

You must not work on Sunday because it is a sin.

But you can work on Monday, Tuesday, Wednesday,

Sung to a melody with a 4-note range similar to “Here We Go Round the Mulberry Bush.”

10 Things My Family Did or Did Not Do on Sundays

Our neighbors, Paul and Edna Mumma, owned and operated the Clearview Diner along Route 230 between Elizabethtown and Mt. Joy, Pennsylvania. As members of the Church of the Brethren (an Anabaptist group similar to the Mennonites) the Mummas adhered to the closed-on-Sunday rule as well. 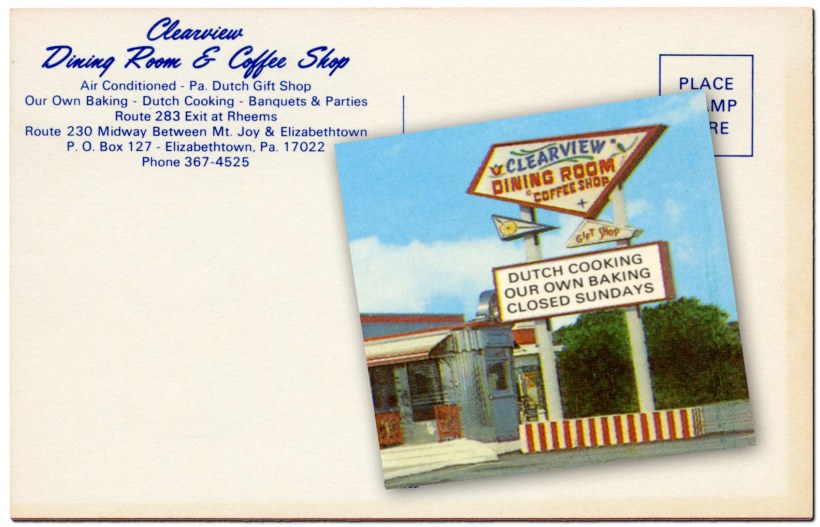 Nowadays most retail stores are open seven days a week. Banks and almost all businesses are accessible online even on Sundays. Yet there remain a few stores like Hobby Lobby and Chick-fil-A whose doors are locked on the Lord’s Day, the latter with soaring profits.

Your thoughts please – a reminiscence or an opinion!